NASA’s Applied Sciences Program, along with the GRACE missions project teams, are implementing a strategy that promotes applications research and engages a broad community of users in the uses of GRACE data. This activity is in response to recommendations of the National Research Council Decadal Survey report (Earth Science and Applications from Space: National Imperatives for the Next Decade and Beyond, Space Studies Board, National Academies Press, 2007). The goals of the GRACE applications program include:

The GRACE Mission Applications Plan is available at the link below;

Where catastrophic droughts and floods are bound to happen in the U.S.
November 2013 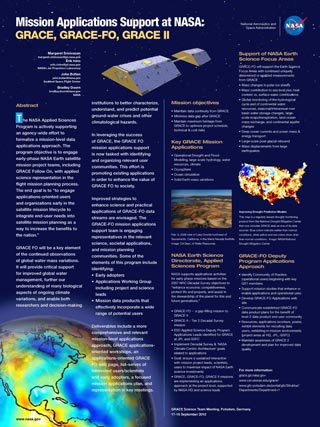 Drought in the Northern Great Plains
Click for more